Last weekend many of FDT’s students participated in the Lower Mainland East Regional Debate Championships. This competitive tournament is the first step for debaters to qualify for provincials as they face off against some of the best teams in their region.

We want to congratulate Alex Logan and Annie Lu for being named the Champion Team in the senior category! Moreover, we want to recognize other FDT students who saw great success. Congrats to Lilah Williamson whose team placed 2nd overall, Sean Oh and Chris Oh for placing 3rd, Jessie Liu for placing 5th as a team, and Grace Hodges for placing 6th as a team. Alex, Annie, Lilah, Sean, Chris, Jessie, and Grace have all qualified to the provincial championships in February. In addition, we want to recognize Emily Qiu whose team placed 10th and is the 2nd alternate for provincials.

We wish all our students the best of luck at provincials! 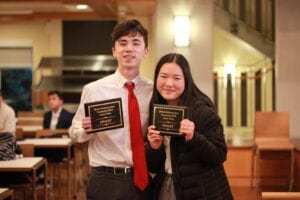