Last month, FDT attended the annual UBC Fall High School Debate Tournament. The tournament is one of the largest in Canada and features the brightest debaters from across the province as well as the country. We are so proud of how our students did!

In the junior category we want to congratulate Madeline Kim and Jennifer Ren as well as Daniel Zhan and Meredith Wang for finishing as semi-finalist teams. In addition, congratulations to Andy Yu and Max Chen for placing as the 5th team overall in the junior category and winning the Champion Novice Team award, to Jerry Song and Jason Song for placing 8th overall and 2nd in the novice category, to Michelle Liu and Isabella Park for placing 9th overall, and to Kennedy Kopke and Ashley Wong for placing 10th.

We are so proud of the work of all our students and instructors to make this fall’s UBC tournament a smashing success for FDT! 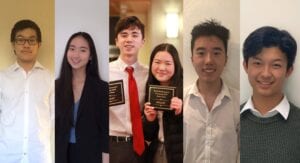