Earlier this month over a dozen FDT students competed in the National Speech and Debate Association Springboard Middle School Debate Tournament in the World Schools category. The tournament was extremely competitive featuring the best middle school debaters from around the US. We are happy to announce that our students found incredible success at the tournament.

Congratulations to Isabella Park, Ivy Ye, Jason Song, Jerry Song, and Matthew Yu for being undefeated in the tournament and winning the Champion Team award! Moreover, we want to recognize Enya Fang, Amrit Khaira, Puneet Khaira, and Adam Ukani for placing 4th as a team as well as Eric Su, Daniel Wu, and Alvin Liang for placing 5th.

Congratulations to all our young students for their success and hard work. 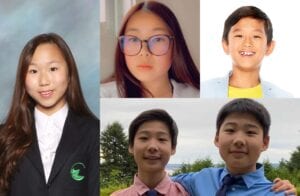