Oldham Cup, an international tournament that is based in Singapore, features some of the best teams from around the world competing against each other. The tournament this year was moved online, however, the competition was as fierce as ever. We are so pleased to announce that after the competitive preliminary and elimination rounds, 2 FDT teams debated against each other in the final round. On a 5-2 decision, FDT CHS ( Michelle Liu, Vanessa Zhang, Isabella Park) won the round and became the Champion team in the junior category. We also want to recognize FDT Green (Angela Lu, Darren Yang, Jeffrey Guo) for placing 2nd overall. Moreover, congratulations to FDT Red (Alice Xu, Sean Oh, Koby Chen) for making it to the Quarterfinal round!

In speaker rankings congrats to Alice Xu for placing 12th, Sean Oh for placing 8th, Vanessa Zhang for placing 5th, and Michelle Liu for winning the Top Speaker award in the junior category.

We are so proud of the success of all of FDT’s bright and young debaters! 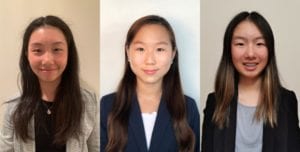