This weekend several FDT students participated in the Junior National Debate Championships. The championships brought together the best teams across Canada in an incredibly competitive tournament online. We are so happy to announce that several teams achieved great successes at the tournament.

In speaker rankings, our students also excelled. We want to congratulate Alice Xu for placing 12th overall, Angela Lu for placing 11th, Jonathan Chu for placing 8th, Aurora Zhang for placing 6th, and Eric Li for placing 4th overall as well as being named the Top Speaker from BC.

This caps off an excellent year for FDT’s young debaters. We are so proud of their success! 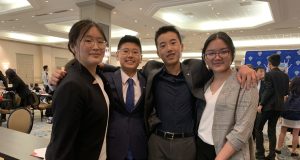