This week, FDT founder Frankie Cena was interviewed for the Kid Carson show on Z95.3 as part of their weekly “Big Free Plug,” a segment featuring local businesses driven by bright ideas and great stories. Frankie spoke to Kid and Jordan about his journey from a high school debater to owner of the most successful debate academy in the world. “My mom always said [that] I started off at the kitchen table and made it into a career,” Frankie said. “When I started coaching it was mostly high school students, but it’s growing and now everyone wants their kid to know public speaking and debate.” Even though FDT now teaches students from grades K-12, what students learn is tailored to their experience level. Frankie explained that with our K-3 program “we’re really talking about confidence, having the kids speak out loud, be able to stand in front of an audience and speak confidently. By the time they get to Grade 4-7 they start to debate the more simple topics. Then, by Grade 8-12 they’re talking about global issues.”

“The kids get to do so many different things. They love it, I love it, and it’s been an amazing career!”

Frankie talked about the value of debate – “It applies to every kind of career, every opportunity, every scholarship, every university wants someone who can speak confidently so we’re really giving kids the most important skill.” Frankie spoke about FDT students’ travels to places like Singapore, England and Argentina, where they competed in (and won!) debate and speech competitions. “The kids get to do so many different things. They love it, I love it, and it’s been an amazing career!” 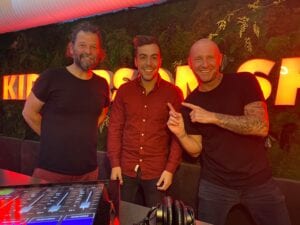 Frankie was happy to to give listeners some tips on how to become a better debater. “Confidence is key. You got to fake it ’til you make it. A big part of public speaking and debating, whether we agree with it or not — and if we look to Trump and look to politicians — is just appearing really confident and having conviction in your voice and in what you’re saying. On the content [side] it’s just making sure that your arguments are clearly thought out, that they’re well explained, and just having a variety of arguments.” He continued, “we teach the basics, the confidence, the eye contact, and the body language.”

Frankie shared with Kid about what FDT’s growth means to him, “I employ my mother, my sister, I have my former students that work with me, and I have my best friend’s sister so its a family affair now [. . .] We have around 300 students and it’s a dream come true to have made this into my job.”

Listen to the full interview below!