This month, several FDT teams attended the EurOpen Debating Championship. This annual competition, usually hosted in Germany, was hosted online this year and featured an even higher level of competition than usual. 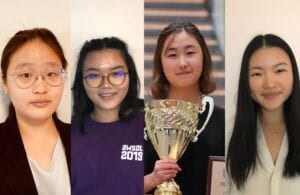 We are so happy to announce that several of FDT’s brightest young debaters broke to the elimination rounds and made it to the octofinals. Congratulations to Annie Lu, Angela Lu, Aurora Zhang, Alice Xu, and Nora Zhu for this impressive achievement. Moreover, we want to recognize the team of Jessie Liu, Sean Oh, Darren Yang, Jerry Zhang, and Jonah Leibu as well as Jin Zhou for making it to the double octofinal round. Finally, congratulations to Team Denmark, Maibritt Henkel, Alma Linnea Del Campo, and Emily Lea Damgaard, coached by FDT instructor Arsalan Ghaemi, for also reaching the double octofinals. In addition, several of FDT’s students who are part of the Canadian National Debating Team did very well too. Congratulations to Alex Logan whose team made the semifinals and Emily Ni and Randy Chang whose team broke 1st and made it to the quarterfinals.

Congratulations to all of our students for their hard work and success!