This weekend the SFU debate society held its first-ever Worlds Schools Tournament and we are proud to announce that after breaking first to the finals, Eric Li, Jonathan Chu, and Jena Yue won the finals and were named the Champion Team!

We are so proud of our student’s achievements! 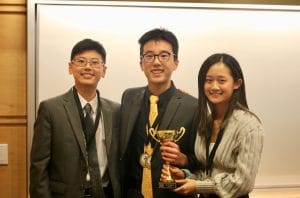