Angela and Jena win chance to try out for Team Canada

Continuing a long tradition of FDT students trying out for and joining the Canadian National Debating Team we are so proud to announce that 2 of our students will follow the same path next year.

This past weekend a select group of the province’s top debaters were invited to compete at the BC Qualifiers for Team Canada. Only the top 3 speakers will get to advance to National Tryouts next year.

With that we want to give a hearty congratulations to Angela Lu and Jena Yue for placing in the Top 3 and qualifying to the National Tryouts next year! We also want to recognize Annie Lu who is the 2nd alternate for National Tryouts and Sean Oh who is the 3rd alternate. Finally, congrats to Alice Xu, Aurora Zhang, and Jonathan Chu for breaking to the semi-finals at the tournament.

We wish Jena and Angela the best of luck as they move on to the next stage of this process! 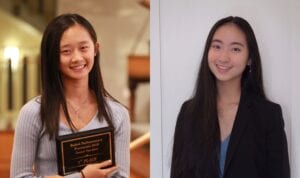